This page provides a broad overview of IRT. In time, I will create more specific content that talks about each area in greater detail. Please email me if you notice any problems. I can be reached at bsl28@cam.ac.uk

In short, there are 4 assumptions of IRT.

Monotonicity is best displayed on a graph as if the curve look like the following below. This curve is called the item characteristics curve (ICC), which is assumed to reflect the true relationship between the trait and the responses to the item. For example, in an educational setting, what you see is that as the ability level increases, the probability of getting the item correct increases monotonicially. Within a health setting, that would mean that as the ability level incerases, the participant is more likely to endorse a higher response option for that item. 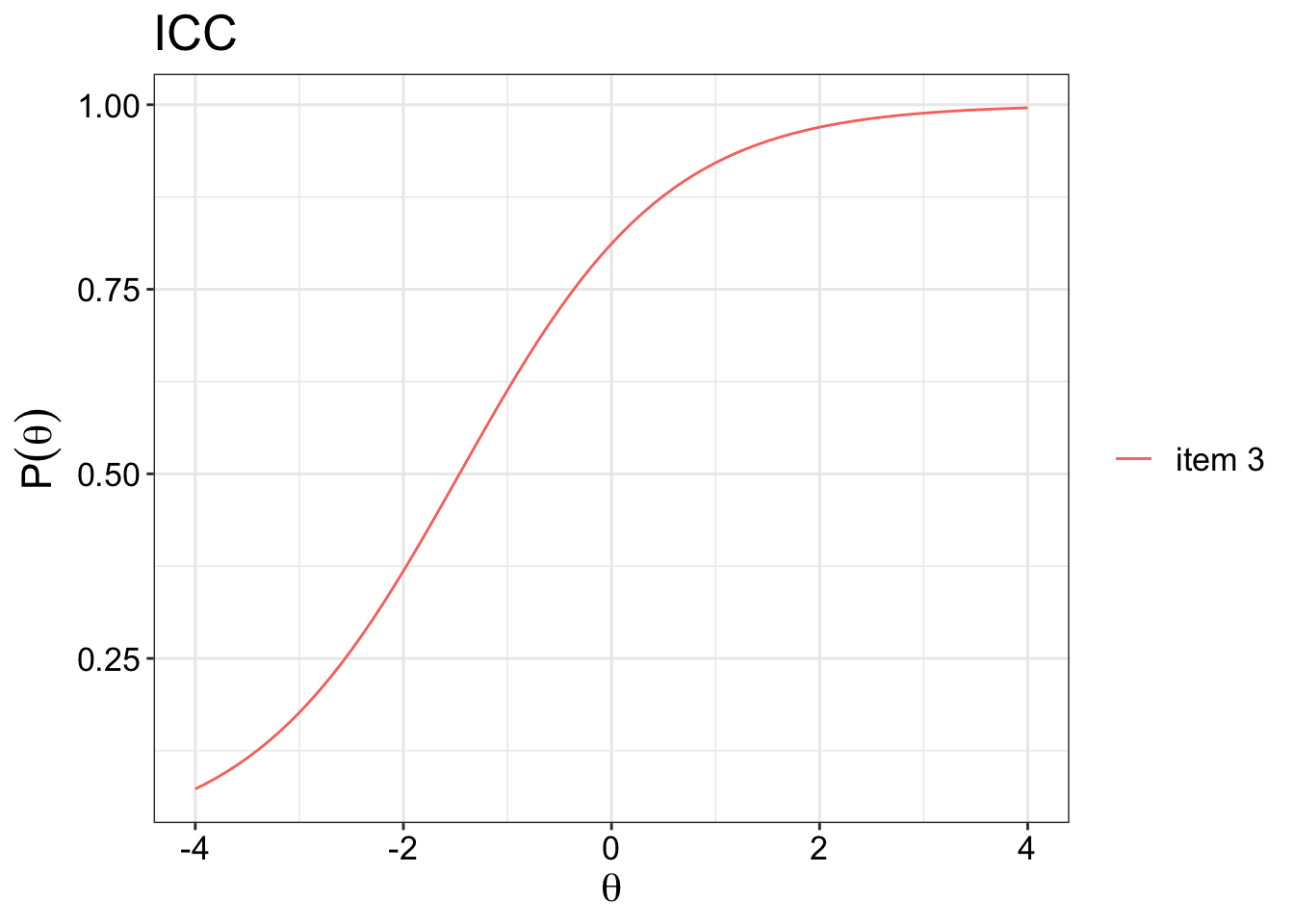 There are a few ways to test this. One way is to use mokken analysis. The mokken package can be used to test for item monotonicity.

In the context of IRT, undimensionality is assumed. That is, only one latent trait is measured by the set of items in the test. For example, all the items in the CES-D scale is a measure of the depression symptoms and nothing else. That is what it means to be unidimensional. You can use factor analysis for example to evaluate the dimensionality of the test. You can think of it graphically like the image below. All the items are meant to be measuring only a single latent trait. 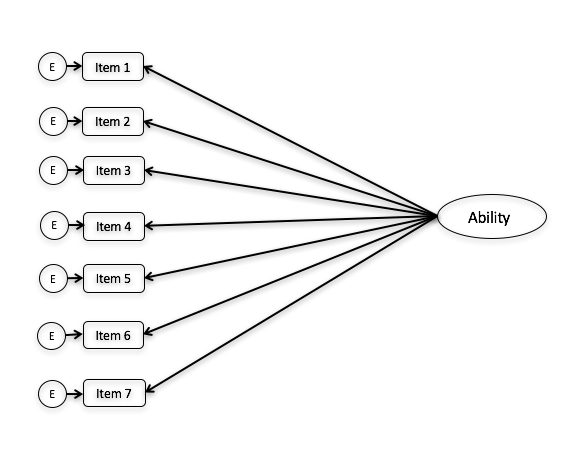 There is something called multidimensional item response theory, where a scale could measure more than a single trait. Reckase (2009) is a fantastic book on the topic of MIRT. But that is something for another day.

Here is how two types of DIF looks like: 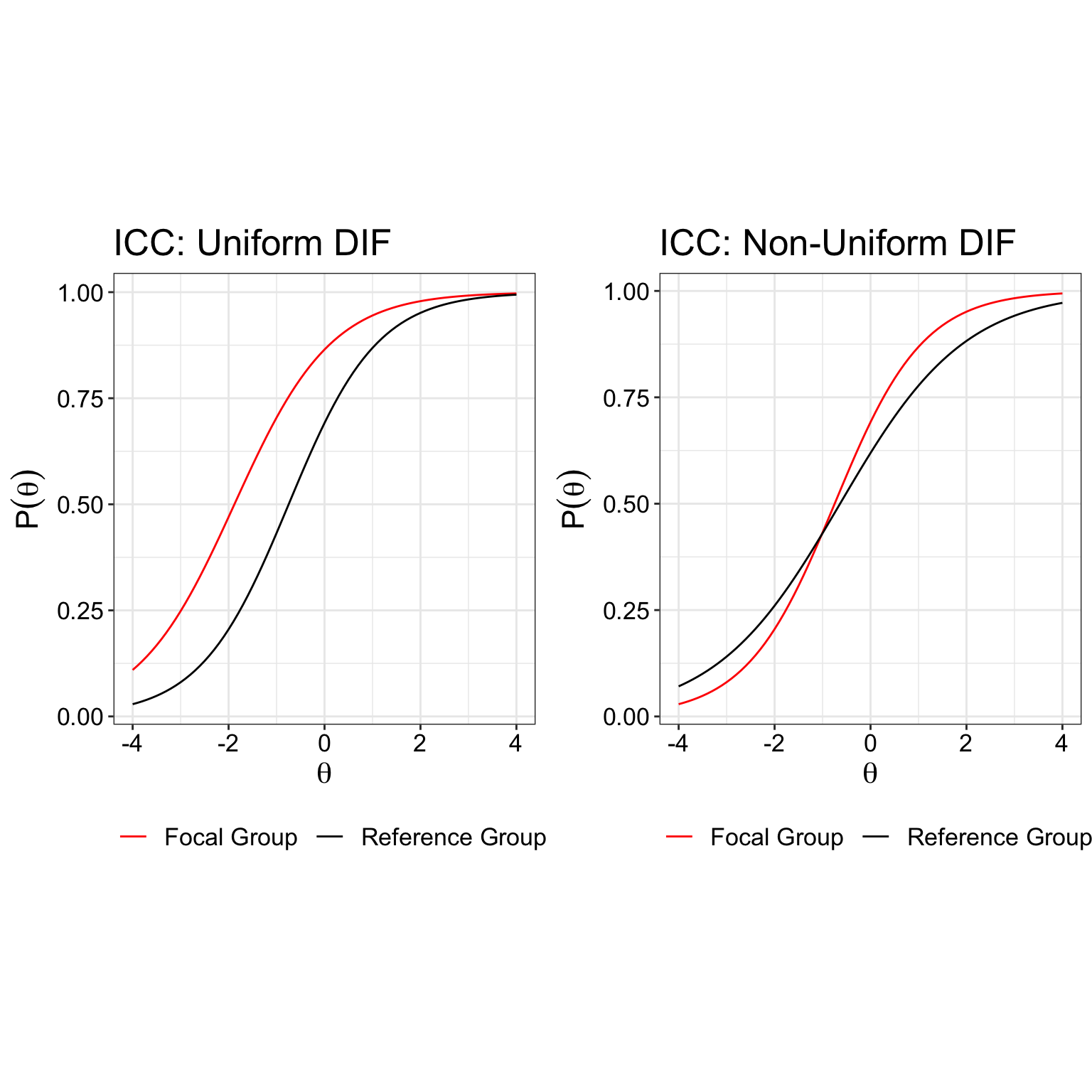 Ideally, you want both curves to be together rather than separated in order for the assumption of item invariance to hold.

Under the assumption of local independence, the participants responses are not statistically related to each other, before and even after the latent trait is taken into consideration. There are two situations where local independence may appear: (1) where negatively worded items are included in the scale. (2) the responses of one item influences the way participant responses to another item. Some solutions to resolve these problems are:

The discrimiation parameter is aka the \(\alpha{_i}\) parameter. It is used to determine how well the items discriminate against different levels of the latent trait. In this case, ranging from -4 to 4. The \(\alpha{_i}\) parameter other name is the slope parameter. Steeper slopes at particular level of the traits indicate that it is more discriminative than levels of the traits with gentler slopes.

In theory, the values for the \(\alpha{_i}\) ranges from \(-\infty\) to \(+\infty\). Negative values of the \(\alpha{_i}\) are possible but considered problematic as it would mean that items with increasing levels of ability are less likely to endore more severe response options. This could happen when the item poorly discriminates between levels of the ability (illogical relationship) or there was some sort of coding error. 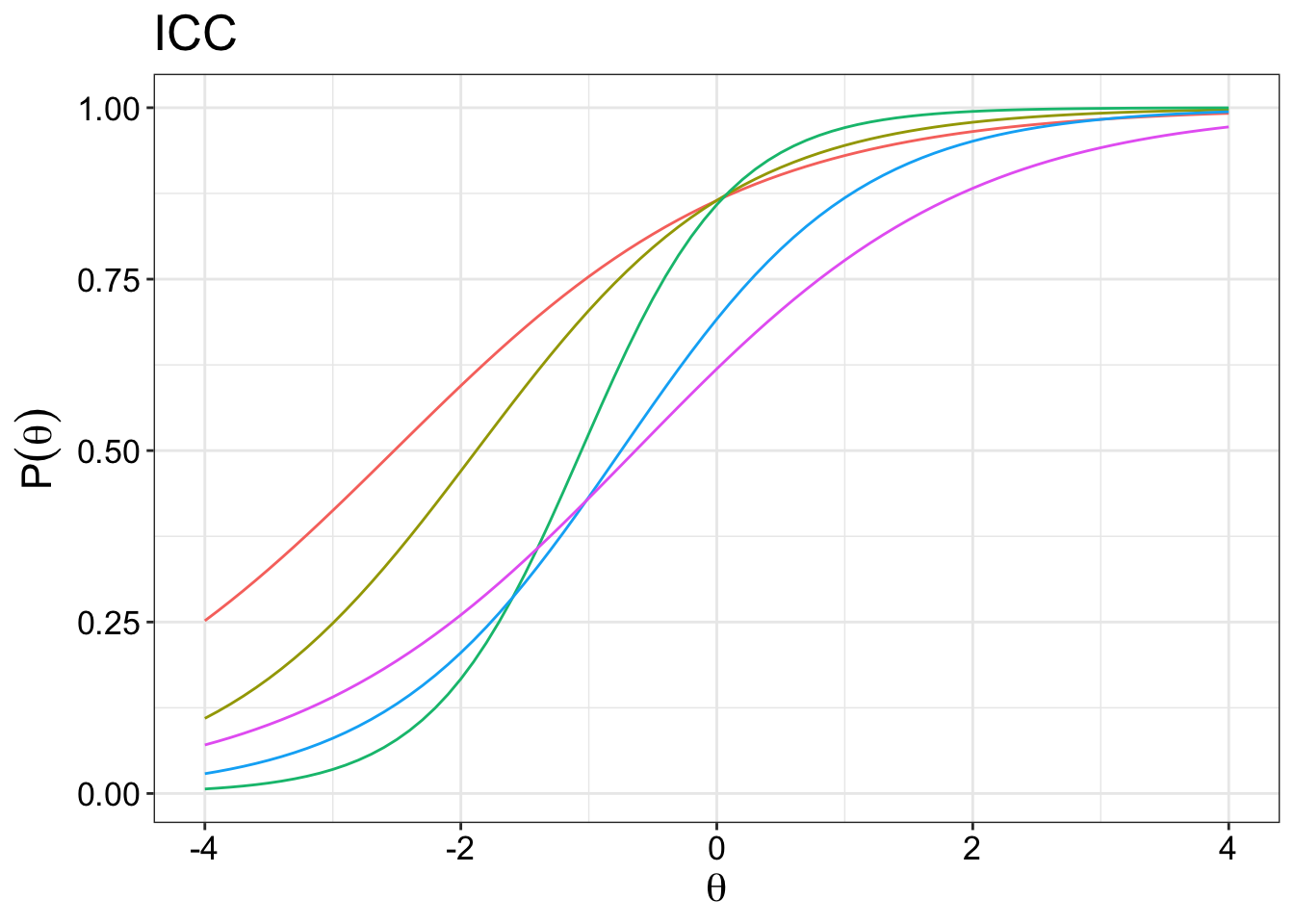 From the plot above, we can see that some items are more discriminating than others. For example, it is clear that the green item is the most discriminating item because of the steepest slope it has compared to the other items. Arguably, either the red item or the purple item would have the gentlest slope. This has to be confirmed emprically of course.

The difficulty parameter is used to describe how difficulty an item is to achieve a 0.5 probability of correct response at a given ability. Therefore, if the 50% chance of correctly answering an item is at the right side of the plot, then it means that a higher level of ability is needed to achieve that goal. Here you can see that item 5 is easier than item 4 because it requires a lower level of theta ability to get a 50% chance of answering an item correctly. 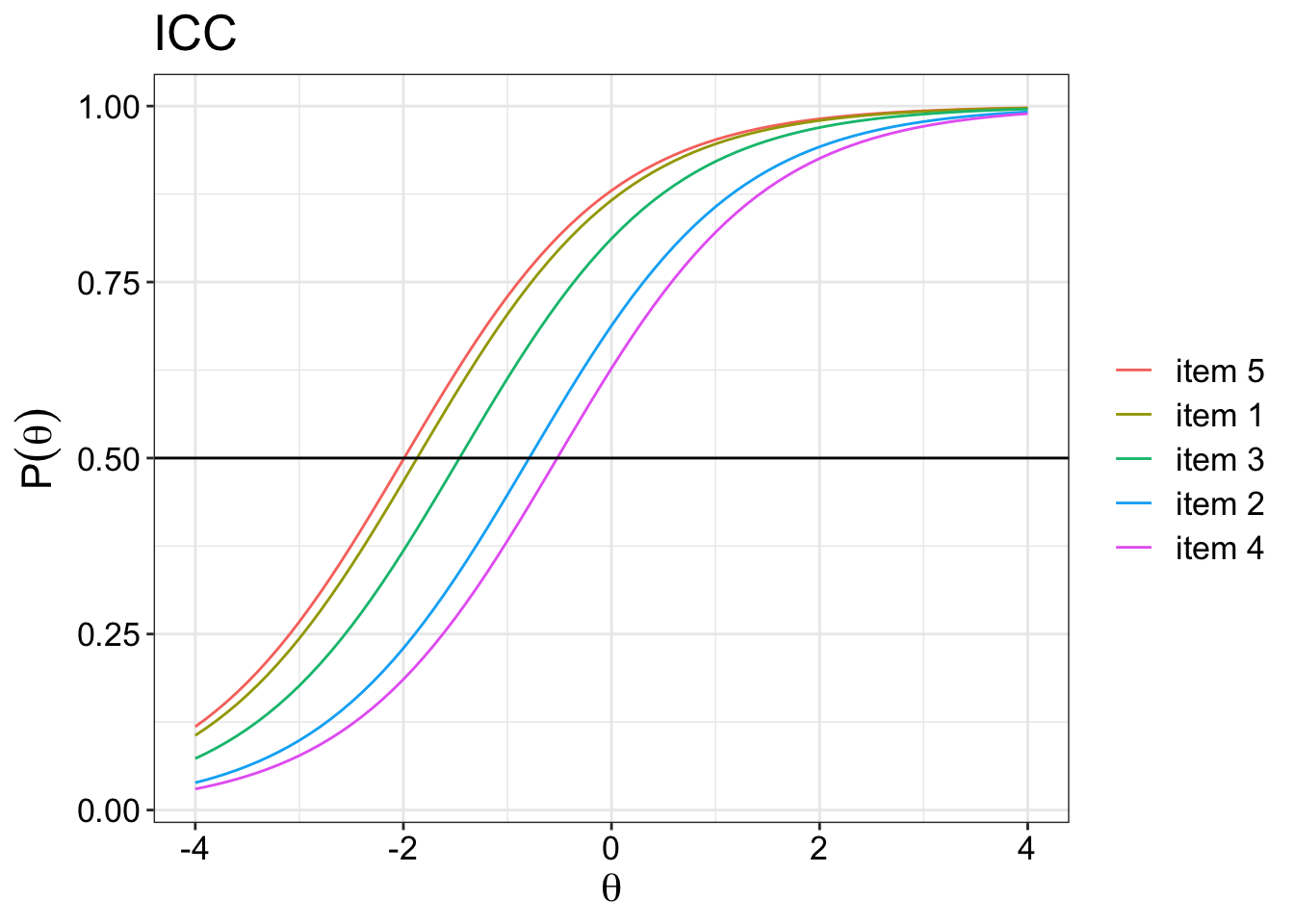 The categorical response curve shows the probability of each response against the theta value that measures the location of the latent trait. In other words, they represent the probability that an individual responds in a particularly category given a trait level. Just a note that, at any fixed value of ability, the sum of the response probabilities is equal to 1.0.

The points where the curves cut each other represents the transition moving from one category to the next. So patients with a theta value of less than -3 will most likely select category 1. Those between greater than -3 and -1.8 will select category 2, so on and so forth. For polytomous items (more than 2 response options), it is very complex to put them all the item curves in a single plot. So each plot represents an item. 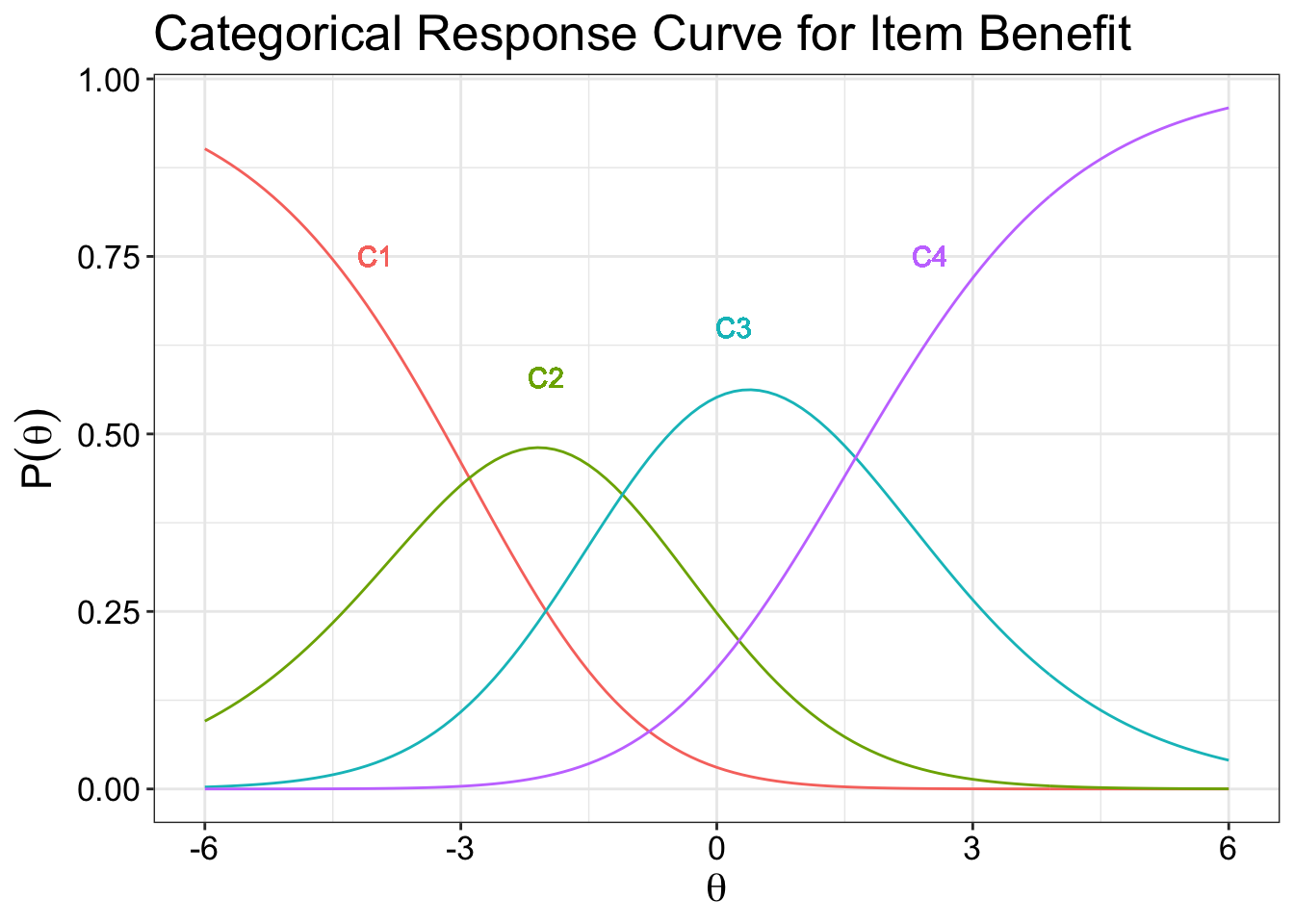 The point of between category threshold parameters represent the point (\(b_{ij}\)) along the latent trait scale at which the participants have a 0.5 probability of responding in or above a category threshold. The value for that point is known as the difficulty parameter between the two categories. So if you have 4 response option, you have 3 categories (k - 1, where k is the number of categories). 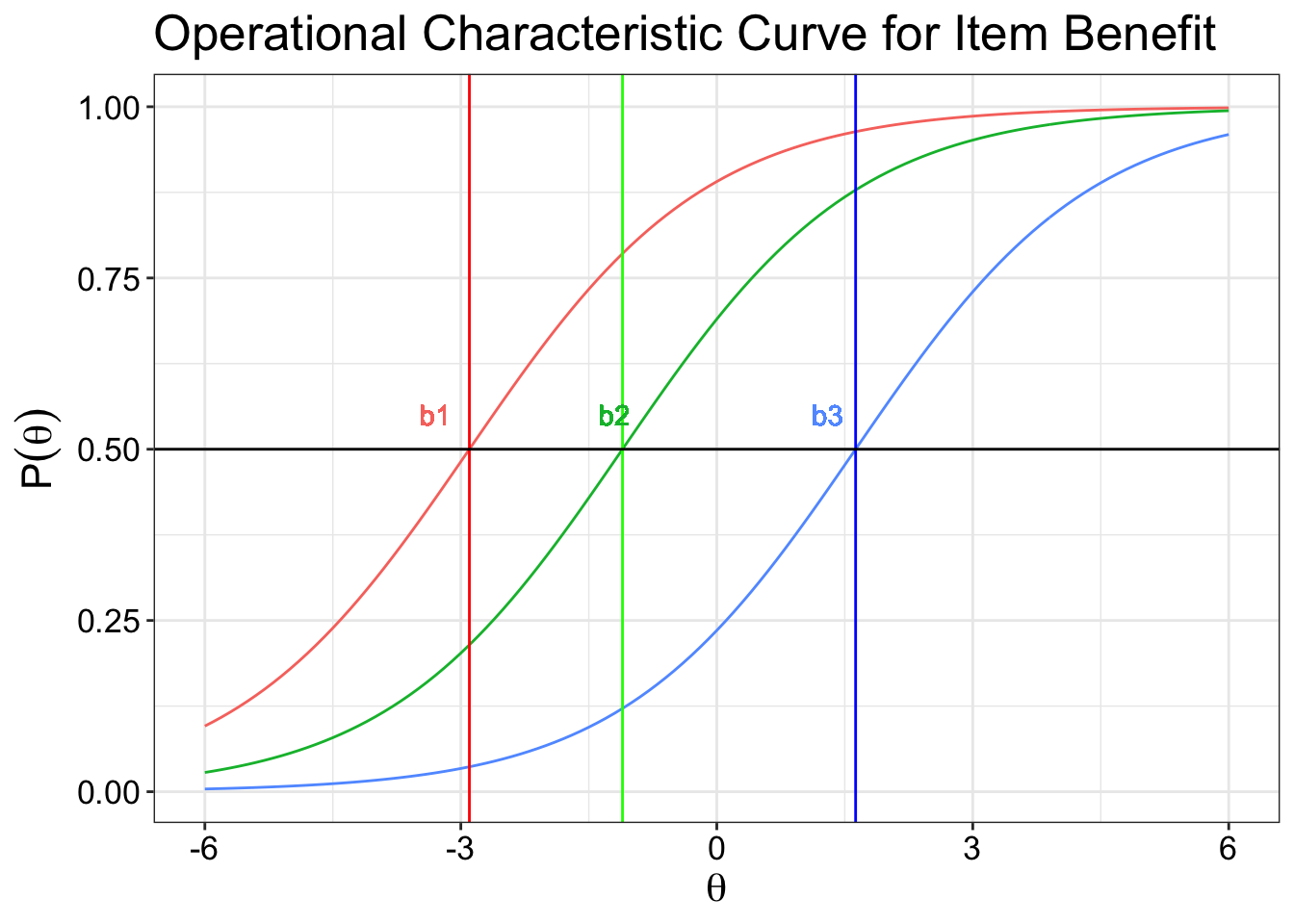 This parameter is not so widely used in the health area or personality assessment since there are usually no right or wrong answers. 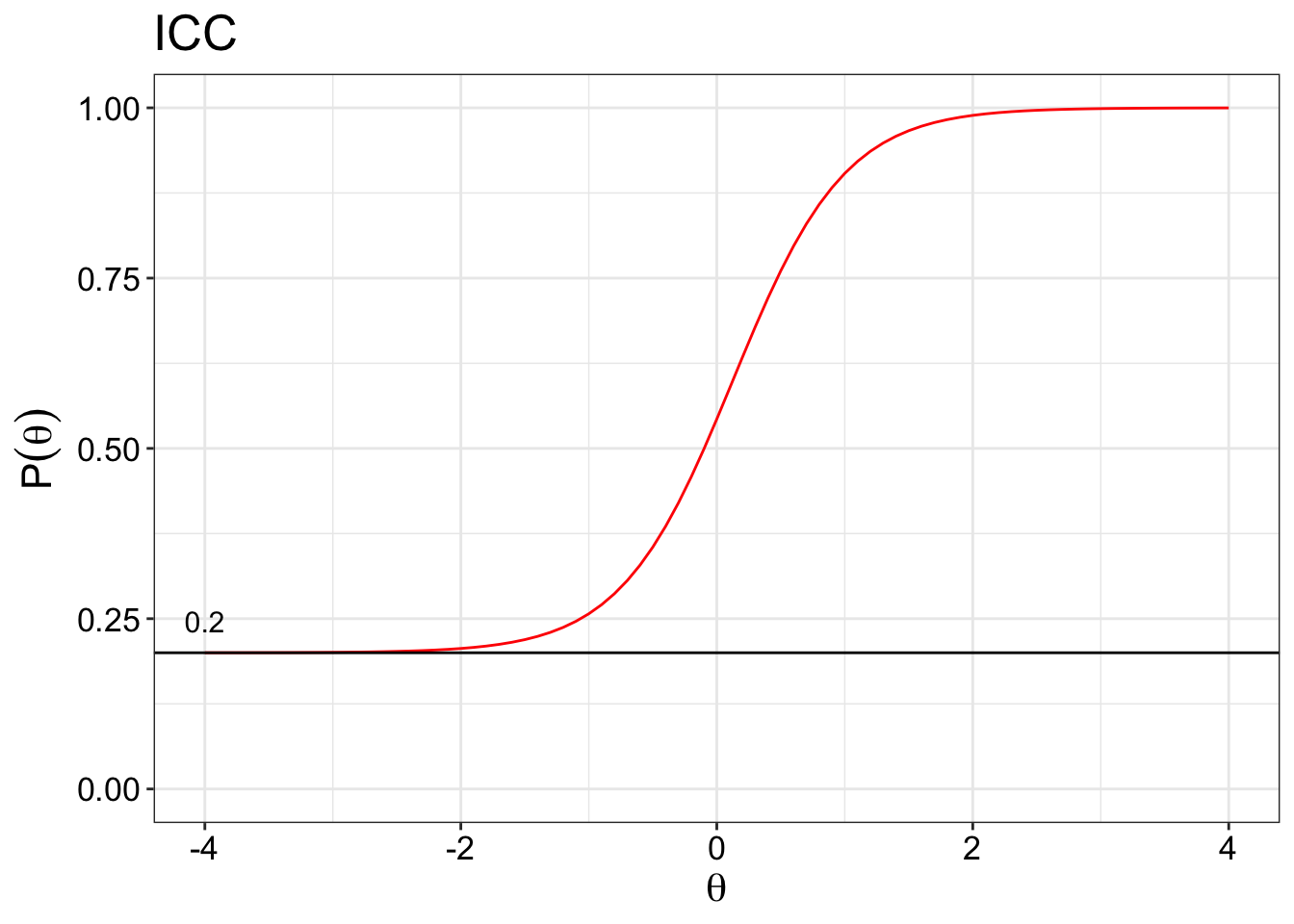 The inattention parameter is included when we want to account for situations where someone may have answered incorrectly unintentionally. This could be reasons such as fatigue, accidently clicking on the wrong response option etc. We set an arbitrary upper value of 0.8.

Again, not so widely use in psychological assessment. 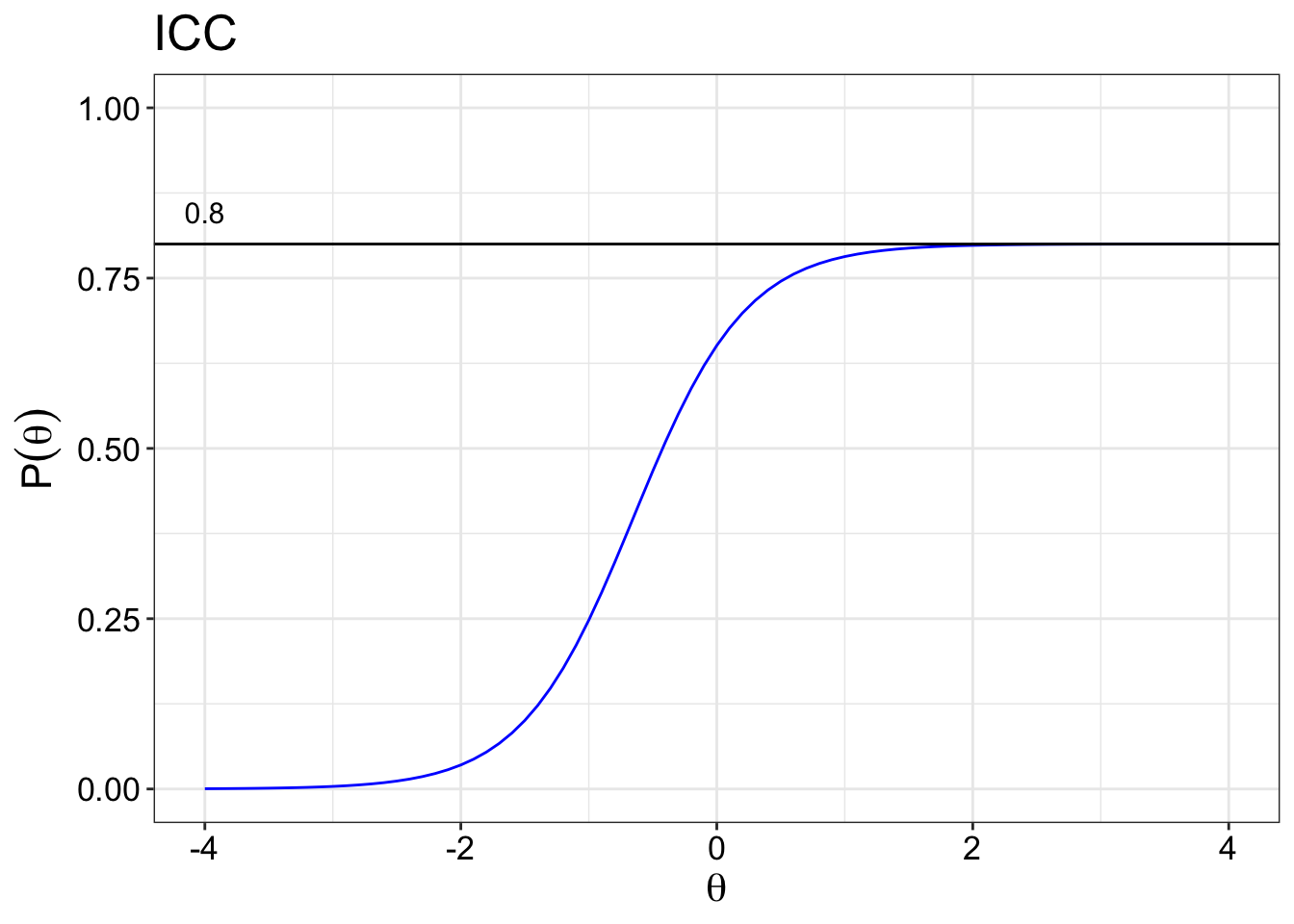 The scaling factor is a constant with the value of 1.7 that is used to bring the estimates of the logistic function and the normnal ogive function in an IRT model to be similar. The logistic function was introduced by Brinbaum to make it easier to calculate item parameters and the probability of theta without too much mathematical complications. The normal ogive function on the other hand, is based on the cumulative normal distribution. Nowadays, the logistic models are more widely used than the normal ogive models.

There are many different IRT models. I will just list the popular ones here for now. I also included the LLTM(s) because I have used them previously. IRT models that include reaction time is not within the scope for now.

The more the merrier is the answer really. There is no gold standard or magic number (Morizot et al, 2007, p.411)

Embretson and Reise (2000) recommended that the focus should be on the size of the standard error of item parameter estimates.

Root mean square errors (RMSEs) reflect the variation of sample parameter estimates within replications for a specific size class. When the sample size is 150, the RMSEs for some categories are as high as 0.90 logits. The RMSEs for most of the categories stay within 0.20 logits when the sample size increases to greater than 1000. (See Qing Ping He & Christopher Wheadon, 2013 for a more detailed discussion)

To convert a discrimination parameter into a value that is similar to a standardised factor loading.

The goodness-of-fit of tests cannot be computed if there are lesser distinct variances and covariances than the number of estimated parameters.

This is because we get a negative degrees of freedom.

For e.g. if we have 4 items with 7 response options. Then the distinct variances and covariances is:

The number of estimated parameters is:

Only the fit of more constrained IRT models with less than 10 parameters can be tested using covariances.

Alternatively, one may also collapse categories prior to the analysis to reduce the number of estimated parameters.